We have been under extreme weather most of the week, but today was like the finale of a fireworks display. We had reports of four different tornadoes moving towards the OKC metro area. The biggest tornado was in El Reno and it was reported to be an EF5 at least 2.5 miles wide. Three other tornadoes seemed to move down I-40 during rush hour with traffic backed up in all directions around the OKC area. One tornado approached the city of Moore, Oklahoma - still devastated by the tornado that hit May 20th. We have been getting flash flood warnings a good part of the evenings as well. 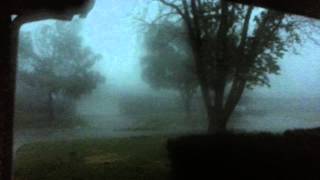 A tornado emergency was declared for Oklahoma City on Friday as a large twister touched down, destroyed a Weather Channel vehicle and made a beeline for Oklahoma's largest city, where authorities pleaded with residents to seek shelter immediately.

No injuries were immediately reported after the tornado touched down near El Reno, in Canadian County west of Oklahoma City, authorities said. But extensive damage was reported around El Reno and Yukon, NBC station KFOR of Oklahoma City reported, which said about 22,000 customers were without power.

A vehicle being used by Weather Channel personnel near El Reno was thrown 200 yards by the tornado, said Mike Bettes, a meteorologist for the station. Bettes and his crew weren't hurt, but the vehicle was destroyed.

The tornado, which at its strongest point approached a mile wide, was bearing down on the downtown area of south Oklahoma City, The Weather Channel and KFOR reported. The National Weather Service declared a tornado emergency, which signifies conditions that could lead to widespread damage and a high likelihood of casualties.

"It's as clear as day â€” it is heading for downtown Oklahoma City," KFOR meteorologist Mike Morgan said. Tornado warnings â€” meaning a tunnel cloud that could become a tornado had been spotted in the area â€” were in effect for numerous counties in Oklahoma and Missouri. Forecasters sounded the alarm that much of the Midwest â€” already pummeled by a week of tornadoes and flooded with drenching rains â€” was staring at yet another round of twisters overnight and into the weekend.

Describing conditions as "particularly dangerous," the National Weather Service declared tornado watches over large areas of Oklahoma, Kansas and Missouri through late Friday and severe storm warnings over an area stretching from Minnesota and Michigan south to Arkansas.

Oklahomans in particular were in the cross-hairs of a storm that forecasters said could bring several intense tornadoes, hail up to 4 inches in diameter and wind gusts approaching 80 mph.

An extraordinarily unstable air mass across central and eastern Oklahoma will churn out severe "supercell" thunderstorms over most of the state, forecasters said.

"Cells that form over southwestern or west-central Oklahoma will move east with a very high threat of giant hail and a few strong to violent tornadoes," the National Weather Service said late Friday afternoon.

A vehicle being used by Weather Channel personnel near El Reno was thrown 200 yards by the tornado, said Mike Bettes, a meteorologist for the station. Bettes said he and his crew weren't hurt. "This is definitely an afternoon to stay extremely vigilant," said Eric Fisher, a meteorologist for the Weather Channel. Heavy rain had already caused flash-flooding Friday in Missouri and in Iowa, where a police officer swimming to rescue a man from his truck had to be rescued himself. Residents of Missouri and Illinois were erecting sandbag walls in areas that still haven't dried out from floods in April.

"It's like a freight train," Cathy Pickens, general manager a bar and restaurant whose parking lot was inundated, told KSHB. "That water goes so fast, and it's just amazing how fast it moves."

Severe thunderstorms were blamed for the death Thursday of Sheriff Cody Carpenter of Scott County, Ark., who was overcome by flash floods while responding to a swift water rescue near the Fourche La Fave River in western Arkansas, the state Game and Fish Commission said.